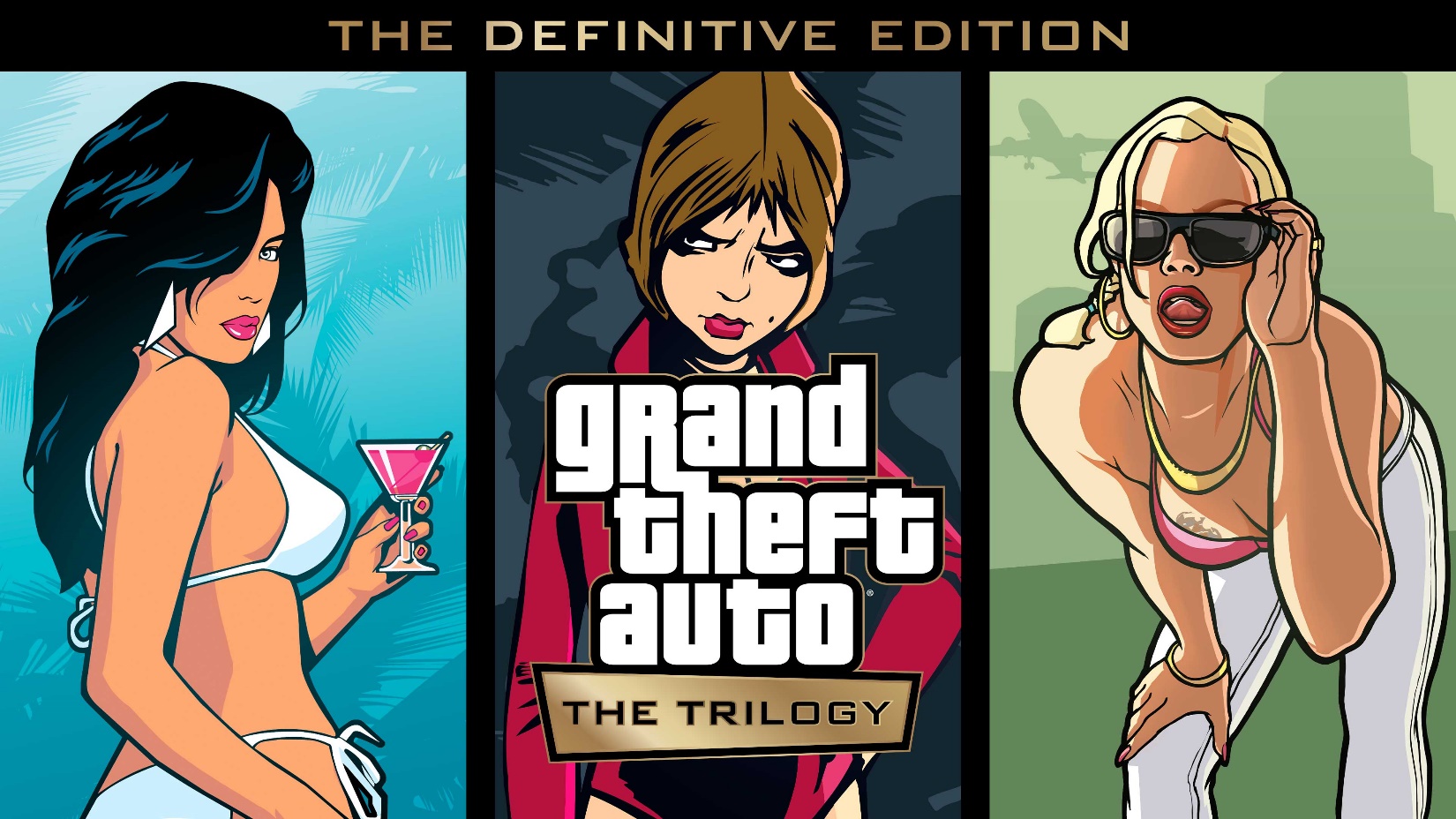 • Grand Theft Auto: Vice City: Welcome to the 1980s. From the decade of big hair and pastel suits comes the story of one man’s rise to the top of the criminal pile. Grand Theft Auto returns with Tommy Vercetti’s tale of betrayal and revenge in a neon-soaked tropical town full of excess and brimming with possibilities.

• Grand Theft Auto: San Andreas: Five years ago, Carl ‘CJ’ Johnson escaped the haze of Los Santos, San Andreas…a city tearing itself apart with gang trouble, drugs, and corruption. Now, it’s the early 90s. CJ’s got to go home – his mother has been murdered, his family has fallen apart, and his childhood friends are all heading towards disaster. On his return to the neighborhood, a couple of cops frame him for homicide, forcing CJ on a journey that takes him across the entire state of San Andreas, to save his family and to take control of the streets in the next iteration of the series that changed everything.

Grand Theft Auto: The Trilogy – The Definitive Edition is a remaster (Not a remake) of the three classics from the early 2000’s PlayStation 2 era of video games.

All three games will be reviewed separately in this review, so if you’d like to hear a specific review, simply click on one of the links:

Grand Theft Auto: III – The Definitive Edition is the first installment of Grand Theft Auto that was in 3 dimensions. It won the Golden Joystick Award for Game of the Year and changed the gaming industry for the better.

It features a Four Hour story mode with plenty of Free roam aspects of the game. You can do virtually whatever you want, including:

You may be thinking… “Well, this is all I need to feed my incredible urge to cause the entire world to burn! This sounds like the perfect game!” – Well you may be correct, if that’s your cup of tea. But Rockstar Games decided they wanted to remaster them for the future generations.
What we got, was the result of Rockstar Game’s need to maximize profits.

This game was the first of the trilogy to be remastered, rightfully so, it was primitive in it’s technology, and it really did need an update.

These are only a few updates, but don’t expect massive overhauls, the game is still virtually the same, except with these new small features to sort of “Modernize” the experience, the game also comes packed with a few smaller upgrades as well, to enhance the gameplay just a bit more.

This is the small feature, but admittedly it may be one of the best amongst those who have terrible navigation skills.

This upgrade adds a Grand Theft Auto: 5 style GPS system to the game, it allows you to zoom out and see your surrounding area. It also zooms out as you speed up in your vehicle.

There is additionally, a new navigation system, the new “GPS” which is the line marking the streets, telling you where to go. It is very handy for those tough situations where you cannot seem to find your destination, gone are the days where you will end up running into a dead end because you can’t find the waypoint.

Speaking of Waypoints, you can now finally add custom waypoints! This will help you navigate the map much more easily, and with the new GPS upgrades, you don’t have to worry about driving off that giant cliff anymore!

The game has been upgraded in terms of graphics as well as gameplay. For example, there are now higher resolution textures, which in reality are simply “AI Upscaled from the original” which, think of it as you will, but the AI they used seems to have botched the upscaling a little bit.

The graphical enhances are poor at best, we will return to this when mentioning another game in the trilogy.

Grand Theft Auto: Vice City was the childhood favorite of most children in the early 2000s, rather if it is because of the bright colors, seductive women, or due to the inner psychopath demons telling little Timmy over there to stomp that rabbit’s face in.

Except this time, it takes place in “Vice City” the Grand Theft Auto universe’s version of Miami Florida. This is an interesting circumstance, because this game looks relatively decent!

That’s right, I personally think that Grove Street Games (The company responsible for the trilogy) did a relatively good job on this rendition of the trilogy.

The lighting is vibrant, the streets are full, the palm trees are Extra Static. There are more of the trees, though, but they really aren’t that impressive.

The game looks great though…. Regarding the city, at least.

Grove Street Games in my opinion, completely butchered the style of the characters.

Ken Rosenburg looks so much like Elvis Presley it is genuinely uncanny. (Good signer, might I add, but horrible character design.)

The graphics enhancements are virtually the same as Grand Theft Auto: III – The Definitive Edition, however, you do have the ability to damage vehicles with your hands.

Ah yes, the Banger, the legend, the game you are all reading this for (statistics show) and I will now talk about this beautiful game.

This is Rockstar’s Game. This is what made them who they are today, so, you would imagine they would do a lot of great upgrades to this game, right?

The map has been downgraded significantly, that is right. This is the only ported game that genuinely feels like a lazy rip-off of an already existing, beautiful game. You may be asking, why do I say that?

This is the graphical upgrades. Notice how the buildings are now completely dark, Grove Street Games couldn’t be bothered to even implement fixed lighting into the third game. It is very disappointing to say the least, and ruins the vibe of the whole game. As far as we know, this issue is not in the other two games in the trilogy.

The draw distance is the #1 complaint amongst the fandom, the game now has no more fog, and as a result, the map now looks very small, and also kills the immersion. This is a popular talk amongst the community, and modifications already have been released to resolve this issue.

However, I will give it credit where credit is due: When the time is right, the game looks decent, but it just feels like a tacked on gimmick in order to attempt to sell you the game for $60 after you bought it 20 years ago.

The other two games had gotten quite a few good upgrades to the gameplay. However, there are no improvements to gameplay on Grand Theft Auto: San Andreas – The Definitive Edition, the only improvement is the GPS.

The only changes, are only downgrades, for example, if this is your sort of thing: The workout mini-game has been completely simplified, you no longer have to press A and B in a pattern to work out your character. This was a change made on Mobile, but for some reason made it’s way into console and PC builds.

The games are decent at best, but it is not worth the asking price of $60 USD. You are better off purchasing the original trilogy and modding it, you will have a much better time.